Global Recovery Monitor 9th edition (May 13 – 27): Summary of The Survey On the Impact of COVID19 on Corporate Treasury

In its 9th edition (Survey Period: May 13 – May 27), the survey witnessed a consistent number of respondents with 1000+ respondents being part of the survey.

1. Accounts receivables, since the outlook in the current survey period, saw 33% of the total respondents having a positive outlook against this metric; hinting at reduced working capital pressures in the near future

2. Commercial Paper Issuance, since a significant number of respondents, have cited having a positive outlook against this metric, further implying the ease of securing short-term loans that can fund business-critical operations.

Access to Debt & Liquidity: The Perspective from May 13 – May 27

The outlook on survey metrics, such as access to short-term loans, money market funds and commercial paper issuances, remained positive, and have also shown a positive forward shift, in comparison to the week of (May 6-13); implying easier access to short-term debts despite the Coronavirus Recession

The outlook on US government’s fiscal activities also saw a significant improvement in the outlook, in comparison to the week of (May 6-13), indicating a positive outlook on the remediation steps being taken by the US government.

The outlook on accounts receivable, however, has remained negative. But the respite for this metric is that 33% of the total respondents cited having a positive outlook against it, implying a sluggish recovery of the metric in the coming weeks. 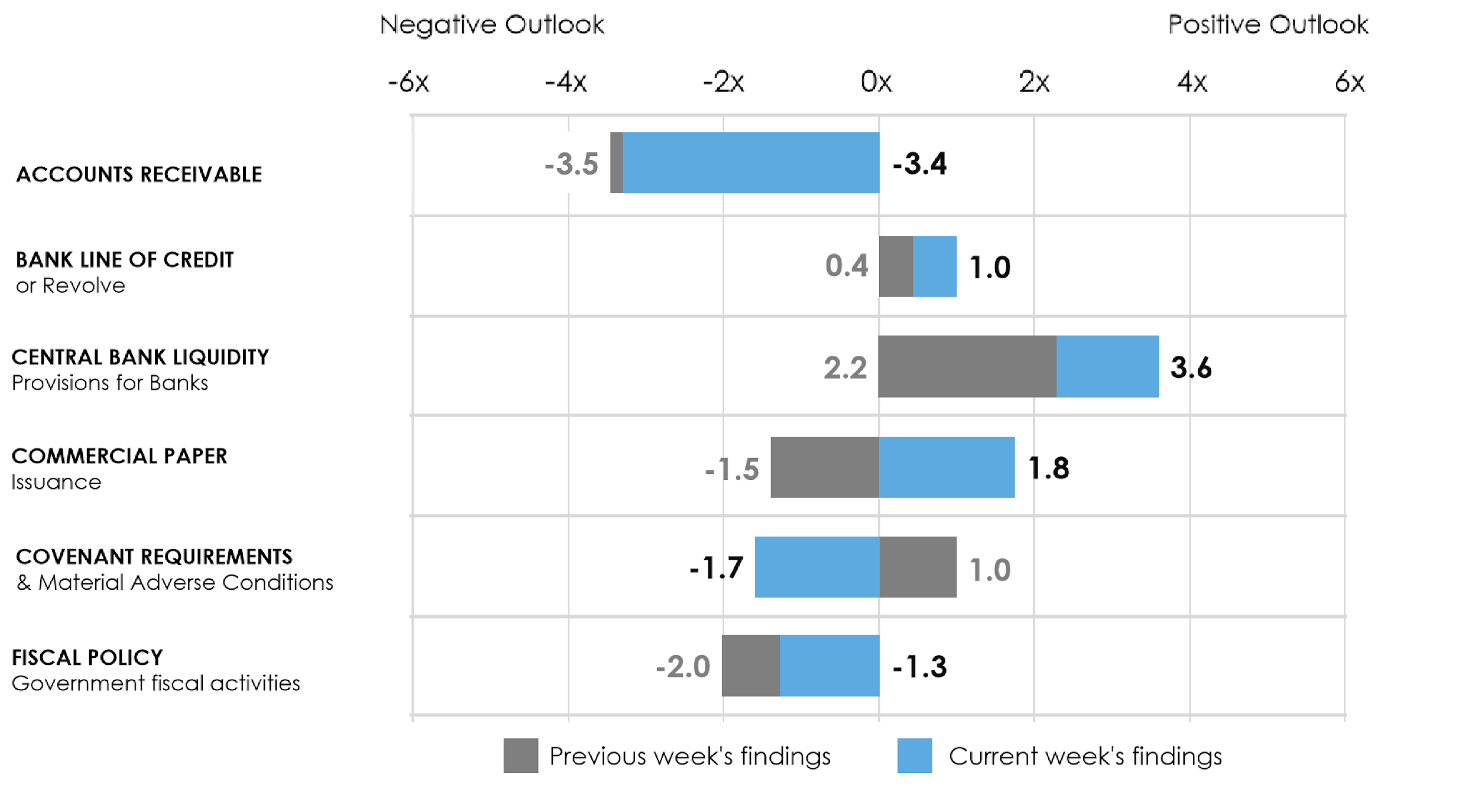 2. Bank lines of credit which earlier had a positive outlook of +0.4X last week, shifted to +1.0X in the current survey period, showing a positive shift and indicating easier accessibility to short-term loans provided by banks, that can be leveraged by organizations

3. Money market funds, which were set up by the central banks to induce liquidity into the system had a positive outlook in the current survey period, with the metric shifting to +3.6X from +2.2X (from the week of May 6 – 8), indicating a progressive shift of this metric in the coming weeks

4. The outlook on commercial paper issuance in the current survey period saw a positive shift to +1.8X from -1.5X (from the week of May 6-8), indicating an ease of access to short term debts by issuing commercial papers.

5. Covenant requirements & MACs had a positive outlook in the week of May 6-8 among the respondents since it stood at +1.0X vs 0X (in comparison to week 7 – April 28 – May 5). In the current survey period, however, the outlook shifted to -1.7X, hinting towards a negative outlook against the metric in the coming weeks.

6. The outlook for the US fiscal policy shifted slightly towards the positive side by standing at -1.3X (in the current survey period) in comparison to -2.0X from last week, indicating a slightly positive sentiment about the remediation initiatives being proposed by the US Senate

In the week 8 survey (May 6-13), respondents cited that COVID19 was expected to reach its inflection point in less than 1 month, while financial normalcy was expected to be restored within 8 months.

However, this week’s results pointed out that financial normalcy can be expected to be seen within 11 months from now; hinting at a slower than expected recovery from current economic pressures and financial conditions. 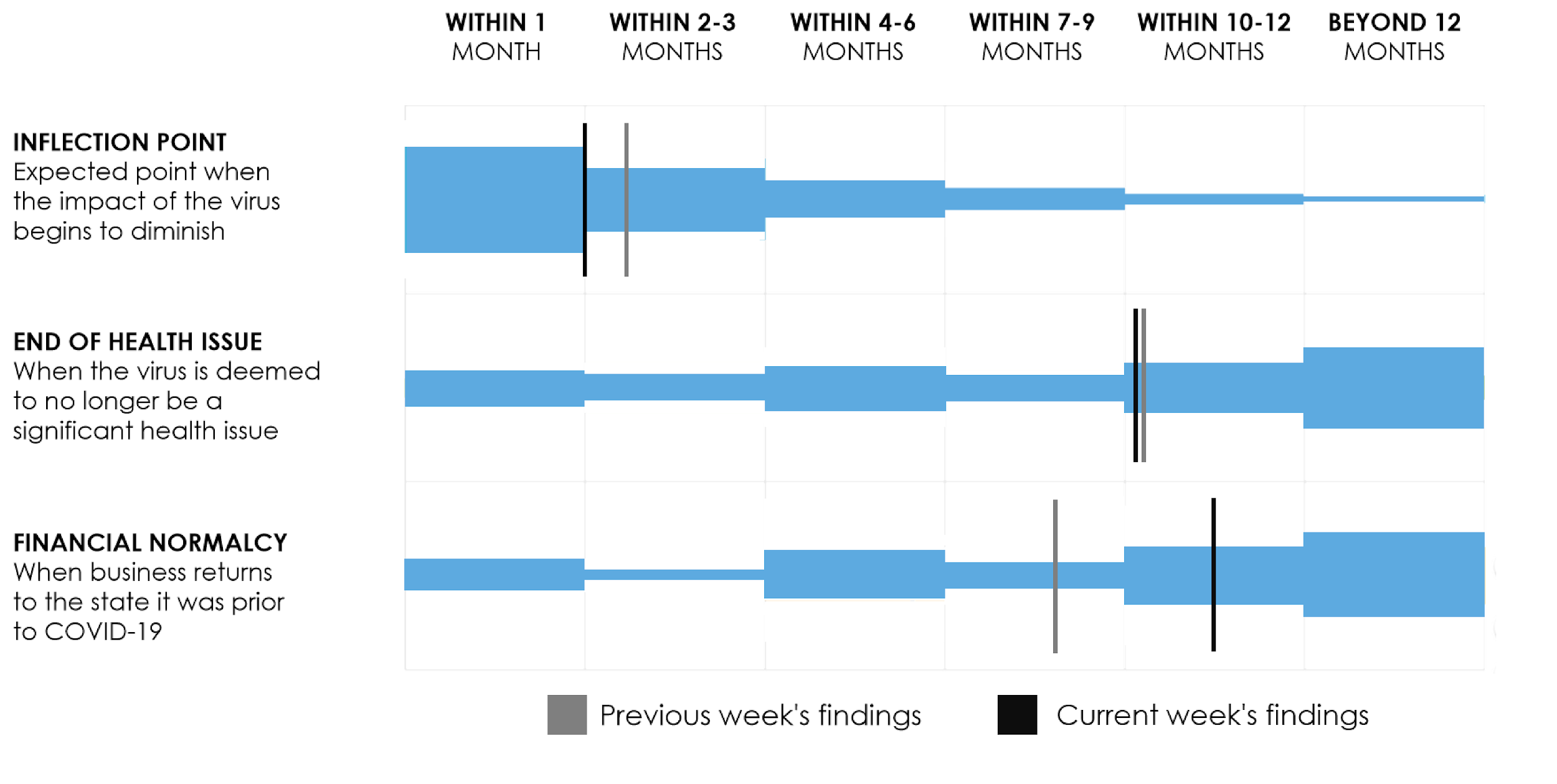 Conclusion: Accounts Receivables and Material Adverse Conditions remain the Top Concerns for Treasurers during (May 13-27)

In this session, Order to Cash leader Steven Wurst speaks about the 4…

The Do’s & Dont’s Of Cash Forecasting

Steve Player, Owner of the Player group would be highlighting the commons mistakes…

How does cash flow automation create an…

Looking to automate cash flows for your treasury department? Cash flow software can…

The HighRadius™ Treasury Management Applications consist of AI-powered Cash Forecasting Cloud and Cash Management Cloud designed to support treasury teams from companies of all sizes and industries. Delivered as SaaS, our solutions seamlessly integrate with multiple systems including ERPs, TMS, accounting systems, and banks using sFTP or API. They help treasuries around the world achieve end-to-end automation in their forecasting and cash management processes to deliver accurate and insightful results with lesser manual effort.