Amazon, Walmart & The Secret Battle for Fintech Supremacy: Part I

In Greek mythology, Titanomachy – otherwise known as the Battle of the Titans – was a series of wars waged between the Titans and the Olympians in the mountains of Thessaly, over ten bloody years. As the legend’s told, the twelve Titans (including Cronus, Coeus, Iapetus, and Atlas), were a race of powerful, giant, gods who’d enjoyed total hegemony over the Universe from their perch on Mount Othrys. They were opposed, by the twelve Olympians (Zeus, Hades, Poseidon, Prometheus, and co.), a plucky new generation of deities, hell-bent on loosening their predecessors’ vice-like grip on power, from their HQ on Mount Olympus. Excluding the problematic themes of infanticide, cannibalism, and megalomania within this ancient saga, the Titanomachy represents the perfect narrative arc for disruption within technology: the powerful old-guard get complacent and energetic whippersnappers come for their throne.

Of the many ongoing incumbent vs. disruptor skirmishes, one titanic battle stands out more than most: the “Battle of the Retail Titans”, between brick-and-mortar king Walmart and its online counterfoil, Amazon.

The future of retail will be a hybrid of eCommerce and brick-and-mortar, and the moves by both parties in opposite directions of the digital divide prove this. There have been a series of high stakes punches thrown, since Walmart first ventured into eCommerce (in 2015) as Amazon’s encroachment into their domain became impossible to ignore. A few days ago, Walmart upped the ante further with a $16B purchase of India’s eCommerce leader Flipkart. This was a muscular response to Amazon’s buying Whole Foods for $13.7B this time last year, and a move which feels both offensive and defensive, given Amazon’s heavy investment into controlling the second-most populace country, after botching China.

While the retail war is entertaining and has dominated headlines, there’s a layer to this battle which has gone under the radar. For years, behind the scenes, both companies have been quietly building up arsenals of Fintech firepower, in an attempt to take a slice of the finance industry’s pie.

Why does this matter? Well, as we’ve discussed, banks are under fire from thousands of start-ups picking off parts of their business models. While a non-trivial concern, the reality is that start-ups do not have the resources or scale necessary to present a truly existential threat to banks. Walmart and Amazon, however, do… In this two-part series, I’ll take you under-the-hood of the financial machines of these two juggernauts. Let’s start with Amazon.

In “The Everything Store”, author Brad Stone writes:

“Bezos is like a chess master playing countless games simultaneously, with the boards organized in such a way that he can efficiently tend to each match.”

Tech commentator Ben Thompson describes Amazon’s ultimate goal as being “to effectively tax all economic activity.” Looking at the company today, it’s hard to argue with either of those characterizations. Jeff Bezos has built an organization that nearly belies comprehension in terms of its sheer scale and power. Indeed, I would need a 20+ part series to even begin to touch on the myriad products and services, subsidiaries and portfolio investments that fall under their corporate umbrella. 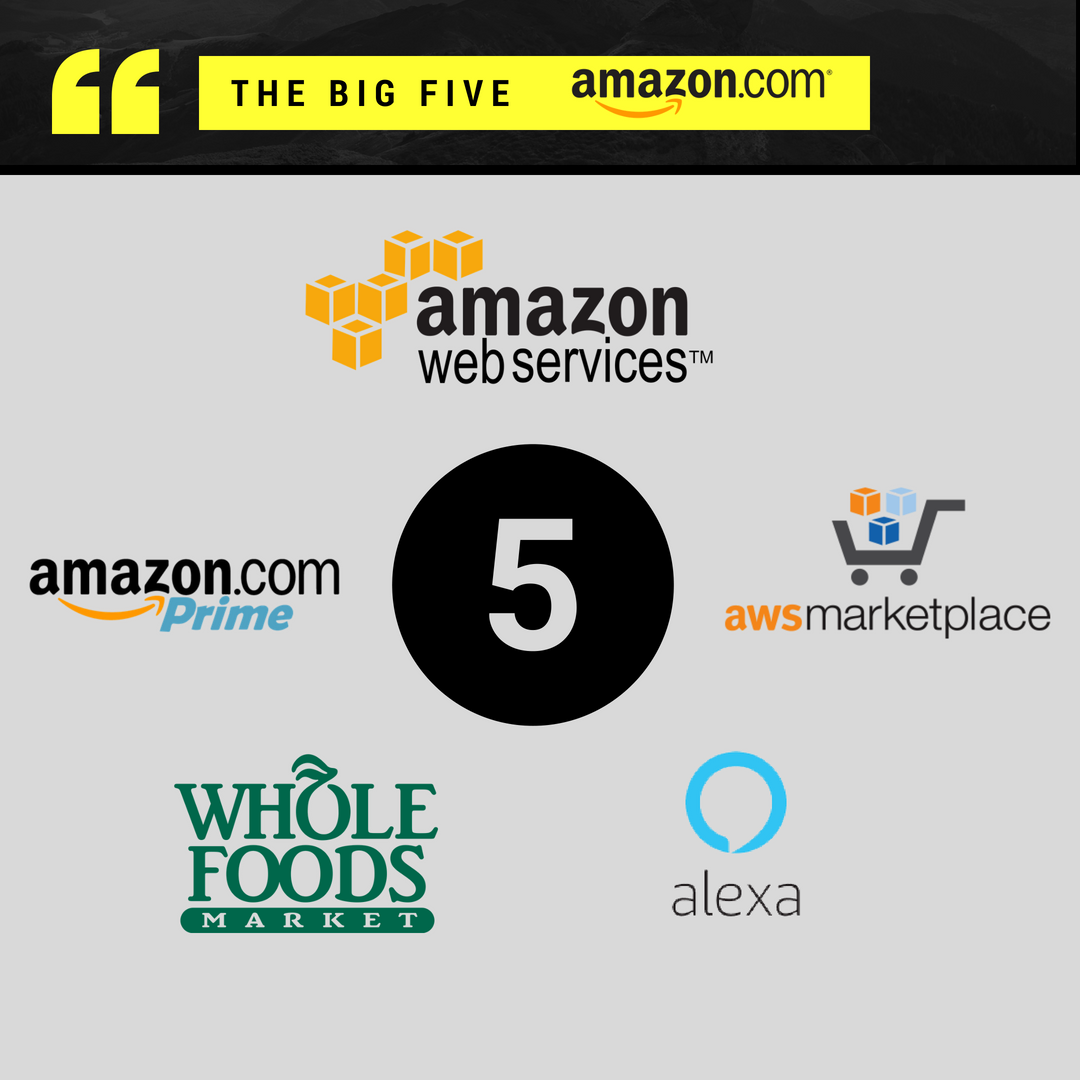 The core of Amazon’s economic engine can be split into five primary divisions:

How has Amazon been able to build a business spanning so many disparate verticals? Because they can do whatever they want, while others can’t. In an article entitled “Losses Are the New Black”, Professor Scott Galloway, author of “The Four” explains it as:

Amazon’s core competence is not operations, the cloud, or even technology, but storytelling. Jeff Bezos’ ability to paint an extraordinary vision (“Earth’s Biggest Store”) and register steady progress against that vision is rewarded with the cheapest capital in the history of business.

Amazon can try 10 things for every one thing peers can. When I sit in board meetings, directors usually ask management to come up with ideas that provide an advantage, relative to required investment — we want cool ideas, that don’t cost too much. I’ve never been to an Amazon board meeting, but I believe management is charged with coming up with cool ideas that are ridiculously expensive, as others can’t follow. The majority of (actual) wars have not been won with strategy, bravery, training, or superior equipment, but brute force. At the end of WWII, the Allies had 38 gallons of gasoline for every one the Germans did. Amazon is the retailer with 38 gallons.

Amazon can go into non-core categories, poke around and be dominant in record time because they have this access: effectively, playing unfair and winning. 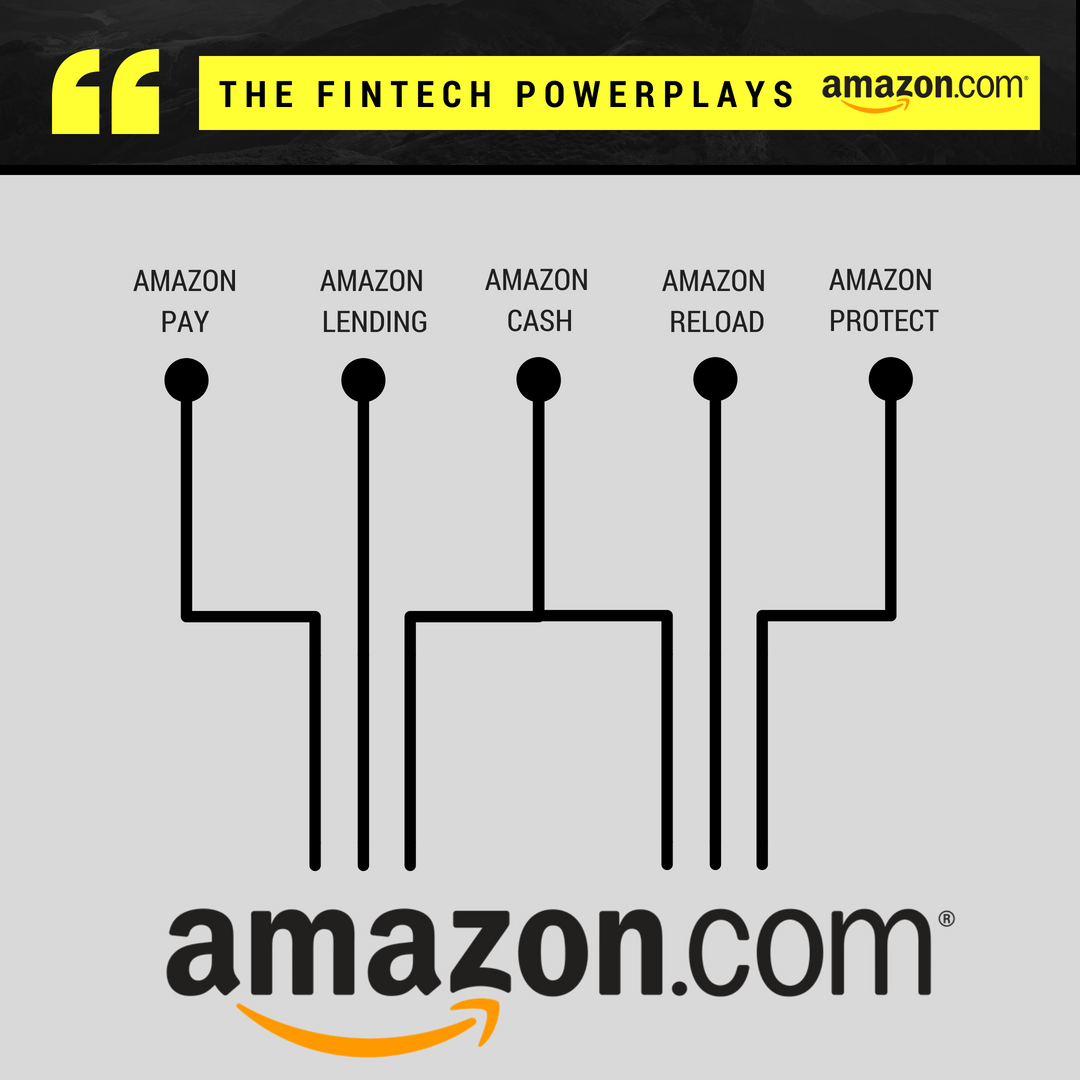 Bezos has put this, plus it’s 300-odd million customers and the exabytes of data they leave in their wake, to use in Fintech.

Amazon has five main products that they’ve rolled out in a handful of their markets, without much fanfare, but they are doing some impressive numbers and developed solid beachheads into financial services:

Amazon Pay is like PayPal, in that it allows merchants to process payments on their sites. The beauty of it is that, in their words:

“It makes it simple for hundreds of millions of customers around the globe to check-in and checkout using information already stored in their Amazon account. The customer experience is familiar and trusted. In just a few taps they can complete a transaction without leaving your site.”

This invite-only program is probably the most interesting one, in my opinion. There are 5 million sellers on Amazon’s platform, many of whom need funding at some point to facilitate growth. Securing small business loans from commercial banks is notoriously difficult (80% of applications get rejected), and requires significant hoop-jumping/documentation provision.

No such problems with Amazon, though. Amazon doesn’t require credit reports, statements, balance sheets or business plans and there are no nuisance fees. The only criteria that matter to them is how the business performs on its platform. Their algorithm does the rest, and a short term (12 months) loan ranging from $1,000 to $750,000 can be approved in as little as 24 hrs. The magic for Amazon is that they make money on the debt (6-16% APR, which is very competitive), collect a fixed amount of gross sales each month to recoup and the loan can only be used for replenishing or augmenting inventory to sell on their platform!

Since 2011, Amazon’s lent out $3B to over 20,000 small businesses and recently partnered with Bank of America to further extend its funding capacity.

Amazon Cash offers un/underbanked members of the population who don’t have credit or debit cards a way to participate in eCommerce. In India, they have doorstep cash pickup which allows users to load money into its digital payment wallet Amazon Pay. Users can top up their balance using cash and pay for digital services including food delivery, bill payment, and mobile recharges. This has also been rolled out in modified form in Mexico as well as the U.S. and Puerto Rico.

Another perk for Prime members in the U.S. that was launched last year, Amazon’s Reload card gives holders cash back on purchases (whether they buy with an Amazon cashback credit card or not). Prime members can receive 2% back on purchases when they first load funds into their Amazon Balance using a debit card attached to their bank’s checking account. This is yet another way of driving people onto the Prime flywheel.

Offered in their European markets, Protect is a white-label insurance product for buyers on their platform, which is an add-on to the manufacture’s guarantee. Above the order button on electronics products, buyers can check the option to include Amazon Protect 2-year or 3-year accident, theft and breakdown cover.

Finance, the Future, and Faustian Bargains

So, there you have it, a look into the moves Amazon’s made into Fintech so far. But what about the future?
Last week, the Wall Street Journal broke the news that Amazon is in very early talks with banks including JP Morgan, about creating checking-account-like products they could offer to customers – especially the young and the un-banked.

According to LendEDU survey data, nearly half of all people asked would be open to using an Amazon checking account (as well as a host of other financial and insurance products), such as the goodwill Bezos’ baby has generated over the last 25 years.

My reaction to this news? This is a brilliant move for Amazon as it would enmesh them even more deeply into the lives of customers. By augmenting the spending pattern data they have with the consumer income, spending and borrowing data held by banks, they would be able to provide a personalized shopping experience like no other. It would also be an excellent way for them to lower their merchant card acceptance costs. Furthermore, once they’ve gotten a toehold here, it’s not a reach to imagine them extending into mortgage lending and other loans, given their superior ability to assess risk.

For the banks, though, I feel this is trickier. There’s a coming collision between finance and Big Tech. On one hand, the banks must become dependent on them or risk falling by the wayside, but at the same time, they need to find a way to partner without losing their core value propositions.

“We thought that FinTech’s would provide the chief digital threat. Instead, it’s become clear that e-commerce companies such as Amazon are reshaping one industry after another, blurring sector boundaries as they seek to be all things to all people. You have companies that have hundreds of millions of customers, offer a great customer experience and trade at a currency that rewards revenue, but not necessarily profit growth. They are under pressure to keep increasing revenue, and financial services is a large pool they can go after. We’re starting to see that.”

If there’s anything Amazon’s track record has shown, it’s that they are more than happy to partner with other companies to improve customer experience and increase revenues… Until they’re not. They’re now in competition with third-party sellers on the marketplace (who kindly give them gobs of data on what’s selling well) with Amazon Basics and could gut delivery partners UPS and FedEx.

If the rise of Alibaba in China as a Fintech behemoth is any indication of the future, banks might want to keep close tabs on developments in Seattle.

Credit and A/R projects are large, complex, expensive and fraught with risks. This…