In my last dispatch, we touched on the parallels between how the Music industry and Financial Services industries responded to their respective run-ins with disruption from the rise of the Internet. Having frolicked in a forty-odd year (largely) disruption-free run, I argued that Financial Services is one of three major greenfield industries (alongside Healthcare and Education) that remains open to large scale Internet-induced shakeups. Sky-high profitability and market caps are too attractive to remain untouched for long, and this $8.5 trillion industry has become the frenzied focus of venture-backed disruptors around the globe, each hankering for a slice of the lucrative pie.

The groundswell of attention has precipitated a “Challenge Trilogy” for traditional financial players, namely

A couple of weeks back, I read about the acquisition of 5-year old A.I. start-up Kensho for a cool $550 million by S&P Global. This marked the largest A.I. deal in history (bigger than Google’s purchase of DeepMind Technologies, Intel’s scoop up of Nervana Systems or any by Apple, Facebook or Twitter).
A couple of things occurred to me:

Given FinTech is my bread and butter, I figured that our next few conversations will look at the roles of these transformative technologies within the ecosystem. To kick off this series, we start with the most powerful of them all: Artificial Intelligence.

In his excellent book “Surviving A.I.”, author Calum Chace breaks down the origin story of the Artificial Intelligence ecosystem. The term Artificial Intelligence was first coined in the summer of 1956, by scientist John McCarthy at a month-long conference at Dartmouth College, the foundational event in the genesis of the science.

For the uninitiated, A.I. is a branch of computer science whose stated goal is to create “intelligent machines”, capable of mimicking the human decision-making process across any given range of endeavors. IBM’s Deep Blue computer, which beat Russian chess master Garry Kasparov in 1997, is one of the most famous demonstrations of the early iteration of AI.

Coming into this century, the next phase of A.I. came to the fore: machine learning. In ML, machines “learn” by themselves via the ingesting of large datasets. This allows them to improve with experience. IBM’s Watson beat human players on Jeopardy in 2011 utilizing ML, by being able to crunch 200 million pages of information that had been fed into it during its training. Upon losing, human contestant Ken Jennings famously quipped, “I for one welcome our new robot overlords.” The most potent phase of A.I.’s evolution, illustrated by Google’s AlphaGo beating Go master Lee Sedol, is deep learning. Deep learning is where multilayered neural networks are exposed to vast hordes of data, training machines to solve any problem which requires “thought”.

A.I. and leveraging machine learning to turn large sets of data into insight is arguably the greatest technological opportunity of all time. For the majority of us, the most obvious demonstration of A.I. sits in our pockets – our smartphones. Outside of smartphones, however, right now A.I. is capable of some staggering feats.

Deep learning neural networks – which are created to mimic the neural connections in our brains and are capable of learning by sucking in huge volumes of data – can execute speech and image recognition at levels higher than us. They can also compose and play music, conduct medical diagnoses, get you off a parking ticket.

The range of A.I.’s application stretches beyond our humble planet, too. In a speech at WIRED2016, a Swiss scientist and “Father of Deep Learning” Jürgen Schmidhuber stated that by 2050 “A.I.’s will colonize and transform the entire cosmos,” with trillions of self-replicating robot factories dotted on the asteroid belt. A “few million years later,” he continued “A.I. will colonize the galaxy”.

PwC ranks A.I. as the biggest commercial opportunity in today’s world, estimating it’ll add $15.7 trillion to the global economy ($6.6 trillion in labor productivity and $9.1 trillion in increased consumer demand), by 2030. To put that into some context, that’s equivalent to:

On the macro front, China aims to lead the world in the field of A.I. by 2030 (and they’re off to a prodigious start). On the micro-level, for the company that leads the AI cloud (democratizing AI as pay-per-use services), it will become the most powerful company in history.

Applications of A.I. in the FinTech Ecosystem

Accenture estimates that the Financial Services industry will grow to $4.6 trillion by 2035, $1.2 trillion more than their baseline calculations point to in its absence. While crypto dominated the headlines in the financial space last year, FinTech companies were quietly infiltrating the industry in less flashy ways. This ranged from fundamentally moving the needle with regards to how we invest, borrow and save, how banks manage risk and regulation as well as how hedge funds scrutinize data and execute trades. 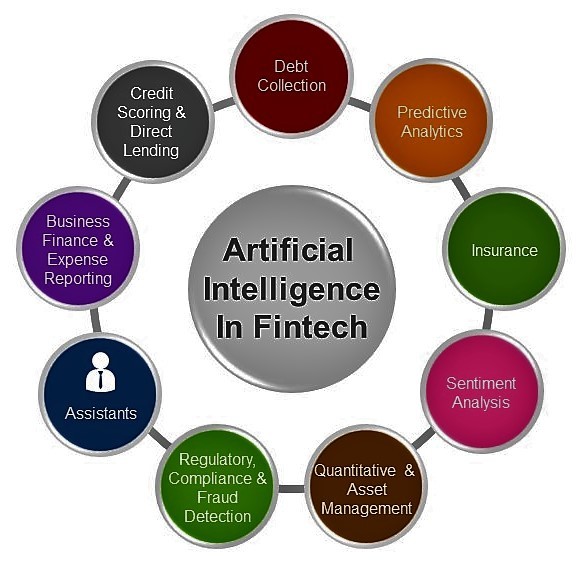 To give you an idea here are 9 main categories that A.I.-first FinTech companies are targeting:

Artificial Intelligence is going to infiltrate every facet of business, and finance as we know it is going to be unrecognizable in short order. While our “robot overlords” haven’t taken over just yet, the revolution is gathering a staggering pace.
Original Source: LinkedIn

In a recent survey by Credit Today, 34% of credit & finance professionals identified collaboration with sales as a top challenge. Think about the revenue that is lost when sales teams do not…

Navigating the Grey Areas of Order to Cash Processes

The order-to-cash(O2C) space is highly regulated with directives on e-invoicing and late-payment and so on. Along with regulations, there could be ambiguity on credit terms, payment acceptance costs et al. So, how do…

Have your credit scoring models caught up with technology advancements such as artificial intelligence and statistically validated algorithms? Or, do you continue relying on expert scorecards that have been designed using manually assigned…