THERE ARE GOOD OMENS, THERE ARE BAD OMENS, AND THEN THERE ARE POST-AUDIT CLAIMS

Post-audit deductions have always been a hot topic and among the most stressful business issues faced by suppliers, especially those in the retail line. Though deductions are an inevitable part of the business world, it is necessary to find ways to deal with them. Moreover, post-audit claims spell bad news for a supplier as they arrive late and often cover business transactions from one to several years old. Given the significance of keeping pace with current business, and the responsibility always being placed on the supplier to challenge or disapprove claims, most suppliers find it difficult to research and track the right documents needed for settlement of such claims. This makes the tracing and resolution process troublesome and complicated.

BEFORE YOU DIVE DEEP, LET’S UNDERSTAND “WHAT ARE POST-AUDIT CLAIMS ?”

Post audit claims are basically a demand for a payment generated by customers or third-party auditors working on behalf of the customers. Such claims are made based on issues such as trade promotions agreed upon but not taken, invoicing errors, and compliance violations not previously identified. Post audit claims might also include claims on overpayment or claims on credit owed but never issued. For such claims, suppliers agree upon a certain grace period for the end-to-end investigation. Such claims might be difficult to trace back due to missing documentation and records.

But what drives a post-audit claim in the first place? Well, trade promotion, pricing and the huge chunk of the commission received by the auditors could be a major driving force.

ON THAT NOTE, WHY ARE POST-AUDITS CONSIDERED A BAD OMEN?

Well, one specific reason is that majority post audits could turn out to be invalid but, how? For starters,

COULD POST-AUDIT CLAIMS BE HANDLED BETTER?

Sure they can! There are certain best practices which when implied could yield amazing results such as :

Apart from all these, ensuring transparency on the grace period and its flexibility could boost up a buyer-friendly policy.

2. Not Delaying on Processing Post-Audit Claims

Addressing post-audit claims timely reduces resolution delays and decreases write-off risk. But there are few strategies that could be used to avoid write-offs. Some of them are:

Leveraging the SOX compliance to make sure that the supplier does not receive any non-documented claims is important. Similarly, keeping in handy a comprehensive list of all the required documents such as POD, BOL, copy of invoices, root-cause for deductions and other required information could stop possible future disputes.

HOWEVER, PREVENTION IS ALWAYS BETTER THAN CURE!

There are ways one could prevent post-audit claims thus, deleting the whole picture in the first place. Let’s find them out.

One of the ways could be by leveraging 404 of SOX Compliance by maintaining internal control for financial documentation and reports among publicly-traded companies. Similarly, creating a complete documentation guide would ensure each promotional deal has SKU-Level details, quantities, pricing information, expiry period information. Another useful way could be sending written confirmation to customers providing them with details of the promotional deals and updates of the claim.

By creating a single document repository where a complete record of all necessary documents is stored with proper indexing, one could avoid a lot of hustle-bustle in gathering information.

Similarly, establishing a real-time document up-gradation by simultaneous updation of the document library every time a new customer is added, makes it easier to trace back documents. Lastly, tracking deductions continuously by a deduction tracker would ensure easy tracking of negligible multiple dippings by third-party auditors.

Curating a proper process helps to pace up deductions resolution time by tracking DDO and other metrics. Similarly, building a self-learning system to identify potential post-audit causes helps to avoid them in the future. Another strategy could be establishing business-configurable workflows in order to resolve post audits faster and maintaining a transparent inter-team communication between sales and accounting in order to successfully remove all the grey areas.

Providing better clarification based on the shipping date, order date, receiving date could make the whole deal transparent and hassle-free.

So now that all the milestones have been cleared from prevention to cure, there are certain compliances that could be used to overcome the challenges discussed above. These are summed up into one whole toolbox of compliance and technology that would help you in both, the handling of Post-Audit Claims and preventing them wherever possible.

With the evolution of technology and the rise of challenges, it becomes a necessity to stay updated with current changes. Leveraging some of these best practices and cloud solutions to manage post-audit claims could help reduce write-offs and propel business growth.

“ EVERYTHING IS POSSIBLE, BEYOND THE WORLD OF WHAT IF.” 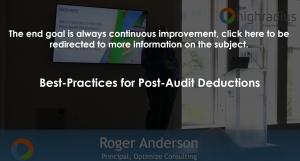 Get a Demo of Deductions Cloud for Your Business