Global Recovery Monitor 10th Edition (May 27 – June 10): A summary of the survey on the impact of COVID19 on corporate treasury

In its 10th edition (Survey Period: May 27 – June 10), the survey witnessed a consistent number of respondents with 1000+ respondents being part of the survey.

1. Accounts receivables, since the outlook in the current survey period, saw 45% of the total respondents having a positive outlook against this metric; hinting at reduced working capital pressures in the near future

2. Central Bank Liquidity, since a significant number of respondents, have cited having a positive outlook against the initiatives taken by the central bank, such as setting up Money Market Funds and more.

Access to Debt & Liquidity: The Perspective from May 27 – June 10

The outlook on survey metrics, such as access to short-term loans, money market funds and commercial paper issuances, remained positive, and have also shown a positive forward shift, in comparison to the period of (May 27 – June 10); implying easier access to short-term debts despite the Coronavirus Recession

The outlook on accounts receivable also has remained negative. But the respite for this metric is that 45% (vs 33% from the last survey period) of the total respondents cited having a positive outlook against it, implying a sluggish recovery of the metric in the coming times. 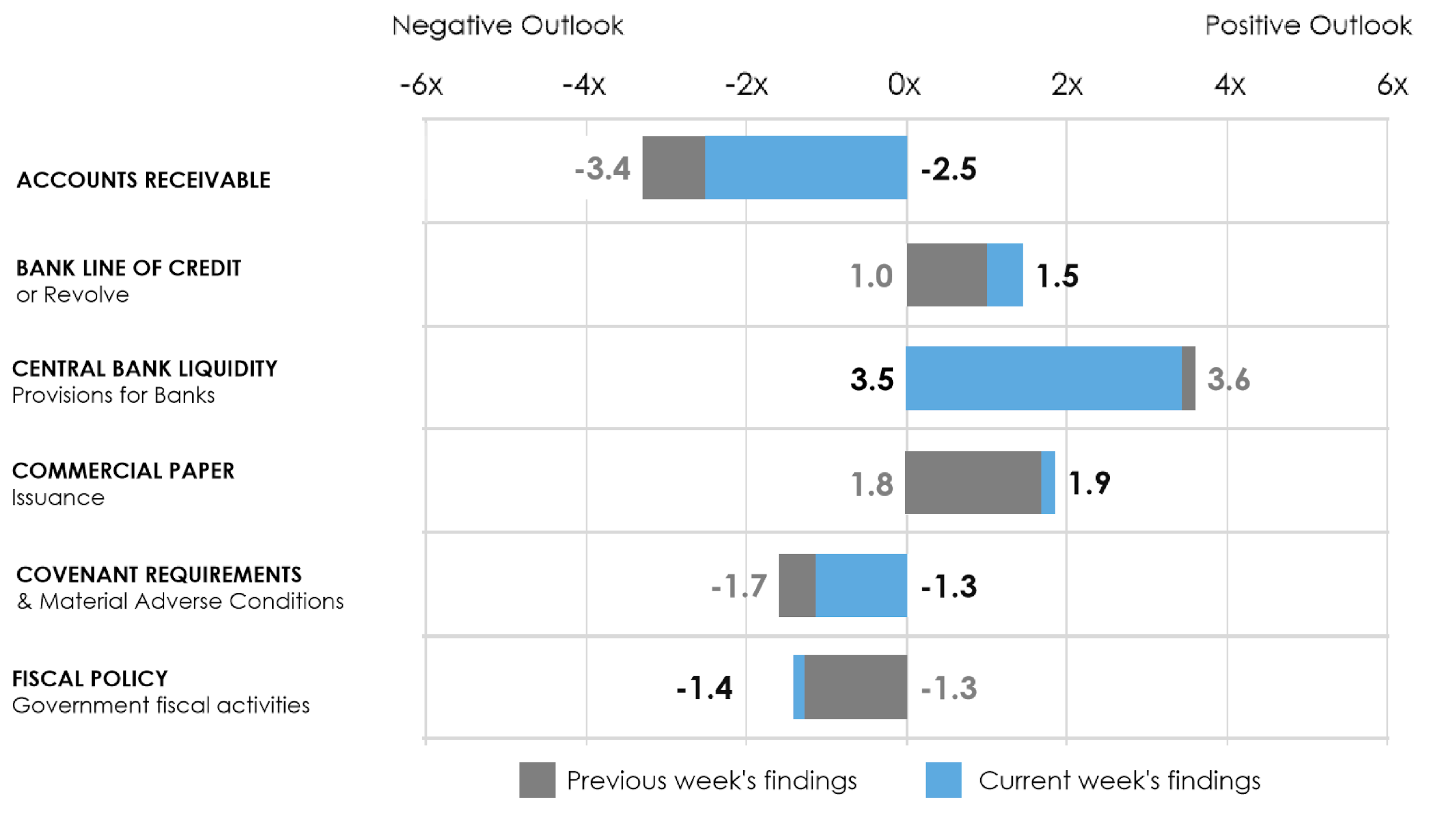 2. Bank lines of credit which earlier had a positive outlook of +1.0X last week, shifted to +1.5X in the current survey period, showing a positive shift and indicating an easier accessibility to short-term loans provided by banks, that can be leveraged by organizations

4. The outlook on commercial paper issuance in the current survey period saw a positive shift to +1.9X from +1.8X (from the period of May 27 – June 10), indicating an ease of access to short term debts by issuing commercial papers.

5. Covenant requirements & MACs had a negative outlook among the respondents since it stood at -1.7X vs +1.0X (in comparison to the period of May 27 – June 10). In the current survey period, however, the outlook shifted to -1.3X, hinting towards a positive outlook against the metric in the coming weeks.

6. The outlook for the US fiscal policy shifted slightly towards the negative side by standing at -1.4X (in the current survey period) in comparison to -1.3X from last week, indicating a slightly negative sentiment about the remediation initiatives being proposed by the US Senate.

In the last survey period (May 13 – May 27), respondents cited that COVID19 was expected to reach its inflection point in less than 1 month, while financial normalcy was expected to be restored within 8 months.

However, this week’s results pointed out that financial normalcy can be expected to be seen within 9 months from now; hinting at a slower than expected recovery from current economic pressures and financial conditions.

Conclusion: Accounts Receivables and Material Adverse Conditions remain the Top Concerns for Treasurers during (May 27 – June 10)

Why is cash forecasting important for large enterprises? In today’s world, Cash is…